Karlsruhe Institute of Technology (KIT) is "The Research University in the Helmholtz Association" with more than 9000 employees and 25,000 students. KIT researches and develops cutting-edge technology in many disciplines and institutes, a prerequisite for the development of novel, innovative technologies for todays and future accelerators. 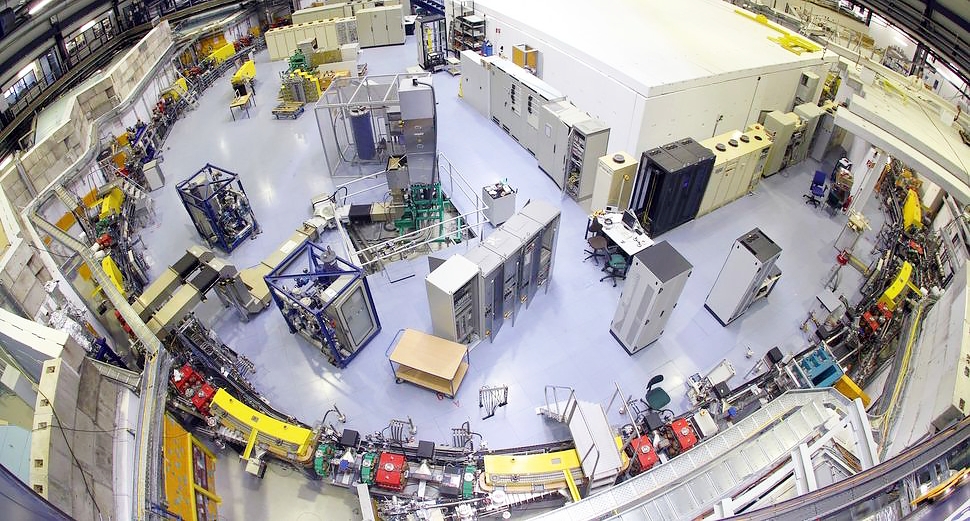 A view of the storage ring, the Karlsruhe Research Accelerator (KARA) at KIT (Photo: KIT)

The Institute for Beam Physics and Technology (IBPT) at KIT operates the Karlsruhe Research Accelerator (KARA), a 110-m storage ring, which provides electrons from 0.5 to 2.5 GeV and synchrotron radiation from coherent synchrotron radiation in the terahertz range to the hard X-ray region. The test facility for accelerator and detector R&D with electrons and photons is part of the KIT Accelerator Technology Platform (ATP). It allows research in accelerator physics and instrumentation or by using the emitted synchrotron radiation. The accelerator complex consists of a 53 MeV microtron, a 500 MeV booster synchrotron and a 2.5 GeV storage ring with a circumference of 110.4 m. KIT tests at KARA cutting-edge vacuum, magnet and superconducting undulator technology. For the 100-km long Future Circular Collider (FCC ) at CERN to advance beyond current LHC energies up to 100 TeV, the KIT is currently testing prototype vacuum chambers that are irradiated with synchrotron radiation produced by the storage ring. These tests are performed within the European project EuroCirCol. A superconducting modular CLIC damping wiggler, a collaboration of KIT with BINP and CERN, and a novel in-series produced superconducting undulator, in cooperation with Bilfinger Noell GmbH, are currently installed and tested in the storage ring KARA. The synchrotron can be filled with an arbitrary, operator-defined bunch pattern ranging from a single-bunch to multiple bunches spaced by 368 ns to 2 ns, respectively. Resulting synchrotron radiation leads to photon pulses with repetition rates from 2.7 MHz to 500 MHz. The storage ring is equipped with state-of-the-art and advanced ps and fs electron and photon beam diagnostics.

Access to KIT-based accelerators via the KIT ATP is augmented by European transnational access via ARIES (Accelerator Research and Innovation for European Science and Society) for accelerator researchers and via CALIPSOplus for small and medium-sized enterprises (SME), and by European technology infrastructures such as AMICI (Accelerator and Magnetic Infrastructure for Cooperation and Innovation). Within ARIES access to KARA will be provided for eight periods of 2.5 days per experiment (totalling 480 hours all together).

AMICI at KIT can be reached via E-Mail: amici@ibpt.kit.edu.