While the string of accelerating cavities is assembled in ISO4 clean rooms, the further assembly of the closed vacuum system to the so-called cold mass which is the inner structure of the cryostat is done in dedicated assembly areas. DESY has developed the respective infrastructure and uses it for standard European XFEL or FLASH modules. 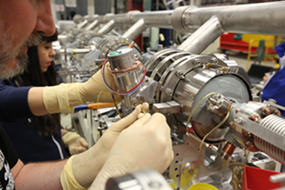 The outside clean room assembly work includes installation of frequency tuners, magnetic shields and others. Finally the cold-mass is moved in to the outer vacuum vessel. The picture shows the almost finished European XFEL 3.9 GHz module after assembly in the DESY infrastructure.

Assembled accelerator modules are extensively tested at cold temperature. After the initial incoming inspection the modules are attached to the vacuum and cryogenic system of the test stand which is installed in a shielding enclosure. Waveguides connect to the radio frequency supply. DESY is operating several of such test stands. Three of them were used for the European XFEL series testing. One additional test stand allows for more sophisticated studies including long pulse are even continuous wave operation. 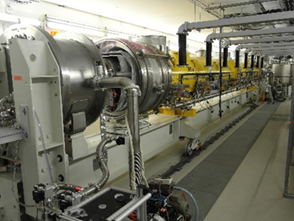 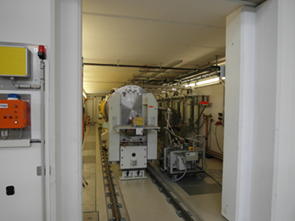 All European XFEL accelerator modules were extensively tested at DESY prior to tunnel installation. The existing test stands are adaptive to a variety of modules. Extension to e.g. special cryostats housing superconducting rf prototypes are under preparation.

Installation of a superconducting linear accelerator requires the beam line vacuum system next to accelerator sections to be particle-free. Thus dedicated cleaning is done prior to installation. Often complete sections of some few meters length are pre-assembled in clean rooms. 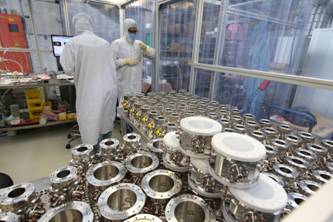 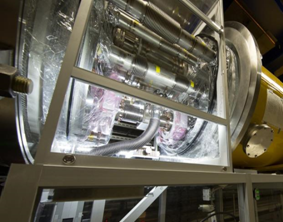